Invited to contribute attractions to Somerville’s Pity Party, I thought about what makes me very very sad, which is fossil-fueled global warming, and what would be good activities for people to do at a block party, which is carnival games. So I made some Climate Change Carnival Games. I created simple, old-timey home-spun carnival games themed with the latest most heartbreaking statistics of loss for our planet. 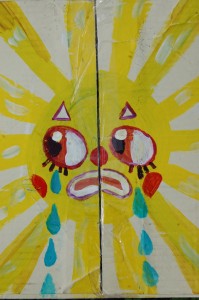 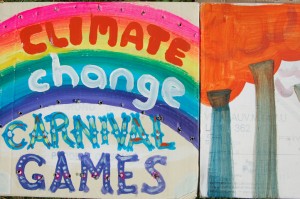 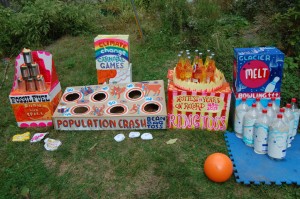 about talking about global warming in polite conversation, and help shake people out of their frozen feelings around the matter, enough to let people talk and think together about their feelings and about taking action. It worked. Lots of great conversations happened. And the prize people won after playing the games was a tiny rainbow sticker that had ACT NOW written on the two clouds.

I made the Fossil Fuel Burn and Spill, where the player throws bean bags painted with cars, airplane and house, some of the most personal uses of fossil fuels, to knock down the cans, representing the remaining fossil fuels left yet unburned in the world. If you knock down all the cans, you get to read the sign behind it: “If all the remaining Fossil Fuels burn, 10,000 gigatons of released CO2 will trap enough heat to melt the Antarctic Ice Sheet, rising Earth’s sea level 200ft. If only 600 gigatons of CO2 are released, the target limit of  degrees Celsius (3.6 degrees Farenheit) warming will hopefully limit sea level rise to only 6.5 feet.” This 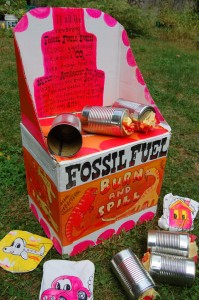 information is a projection from a model based on current data, studied by Ricarda Winkelmann, a climate scientist at the Potsdam Institute for Climate Impact Research in Germany, reported in Katherine Bagley for Inside Climate News, in her article Climate Change’s Worst-Case Scenario: 200 feet Sea Level Rise, Sept. 11, 015. And, to see what 6.5 feet of sea level riselooks like in your zip code, visit Surging Seas sea level rise analysis by Climate Central. 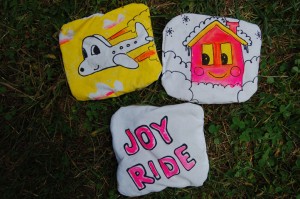 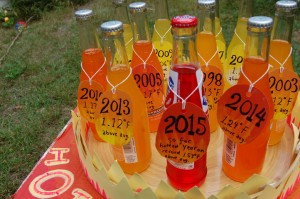 This summer was the hottest July on record, and even though its not over, 2015 is already the hottest year on record. NASA’s Global Climate Change Vital Signs of the Planet is illuminating for up to the minute information. Iran broke records with 165 degree weather. Most of the hottest years were within the last decade, except for 1998, which suffered from el Nino. So

this terrifying trend, I illustrated with different color soda bottles, which I spent way too long in the grocery store choosing.  I wanted to go with a classic carnival themed painting and sort of fancy circus-y lettering. I ran out of time to paint kitch-y devil faces on the sides. For the rings, I used glow stick necklaces, which make nice hoops, which was lovely as the twilight came on. People had fun trying to pick the years they were trying to ring. 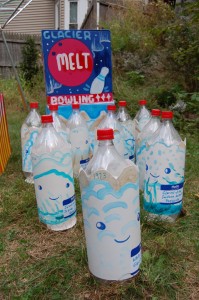 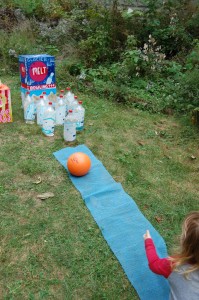 This little bowling alley is based on some of the most visible effects of globe warming: the melting of the earth’s glaciers and ice sheets.  I costumed each bowling pin as a known glacier, complete with a “Hello my name is” sticker. Using information from 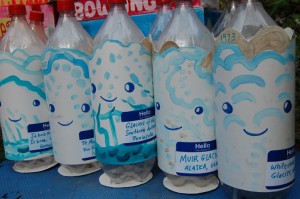 archival photographs of glaciers, paired with more recent photographs, I put a more recent image of the glacier on the bottom, sort of a before and after image, so that when you use the CO2 bowling ball to knock the glaciers down, you can see how they are melted, and their faces go  from happy (standing) to sad (knocked down). 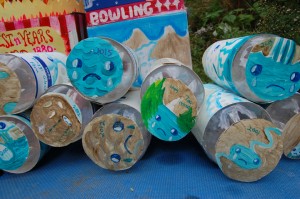 The melted land ice is contributing to sea level rise, and “The rate at which glaciers are losing mass appears to have accelerated over roughly the last decade,” according to the United States Environmental Protection Agency, where you can go for more enlightening information. 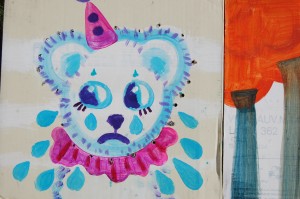 Many populations of species are disappearing because of fossil-fuled global warming. Sometimes people think this is a far-away thing, or something of the future, but changes of a few degrees have already upset ecosystems here in New England. Moose, for example in New Hampshire: their population dropped 40% in two years! It turns out that the southern boundary of Moose habitat is where its too cold for ticks. But not ticks are spreading up into Northern New England, and Moose can’t survive the onslaught. Most of the calves this year did not survive last winter. And Maples trees! The sugar in their sap as dropped by 2/3! And lobsters! Lobster populations have dropped 50% in New England in the last several years due to the oceans warming. Our region’s economy depends on these species. And many other species. How much do we have to loose before we decide to give up fossil fuels? This bean bag toss was the most surprising to people.

We had a lot of good conversations as people tried to throw bean bags in the holes. I put the numbers where the points would usually be as the % or # of species, lost so far. This information is alarming and makes me sad. This bean bag toss was really helpful to open up these numbers for discussion. When you are alone with bad feelings, it can make you frozen. Our collective numbness will be our undoing. We need to feel our feelings so we work through them, get past them and think what to do to stop global warming.

I have other games to add for the next venue: a MUNICIPAL SNOW REMOVAL BUGET SHORTFALL PENNY-DROP GAME, and a SEA LEVEL RISE DUCK LUCK. In the mean time, can I ask you, to talk with other people about fossil-fueled global warming? Get informed, talk to people, join a group, sign petitions, go to protests, and hearings, urge your representatives, world leaders, town councils, and schools, to divest from fossil fuels, switch to renewable energy, stop burning fossil fuels, and act now to get rid of the deadly amount of CO2 in our atmosphere. When it feels too tough, play a bean bag toss, or make something, or talk with someone, while you think what to do next. 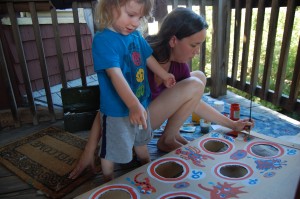