Parades are an excellent way to reach out to your community and connect with a broader audience. Wonderland Spectacle Co. Artist Greg Cook and I lead community workshops in creating themed parade banners, signs, masks and murals that really stand out visually and involve everybody to tell your community organization’s story. Together, we can make a lasting impression. More details can be found in Workshops and also our holiday parade spectacle guide. 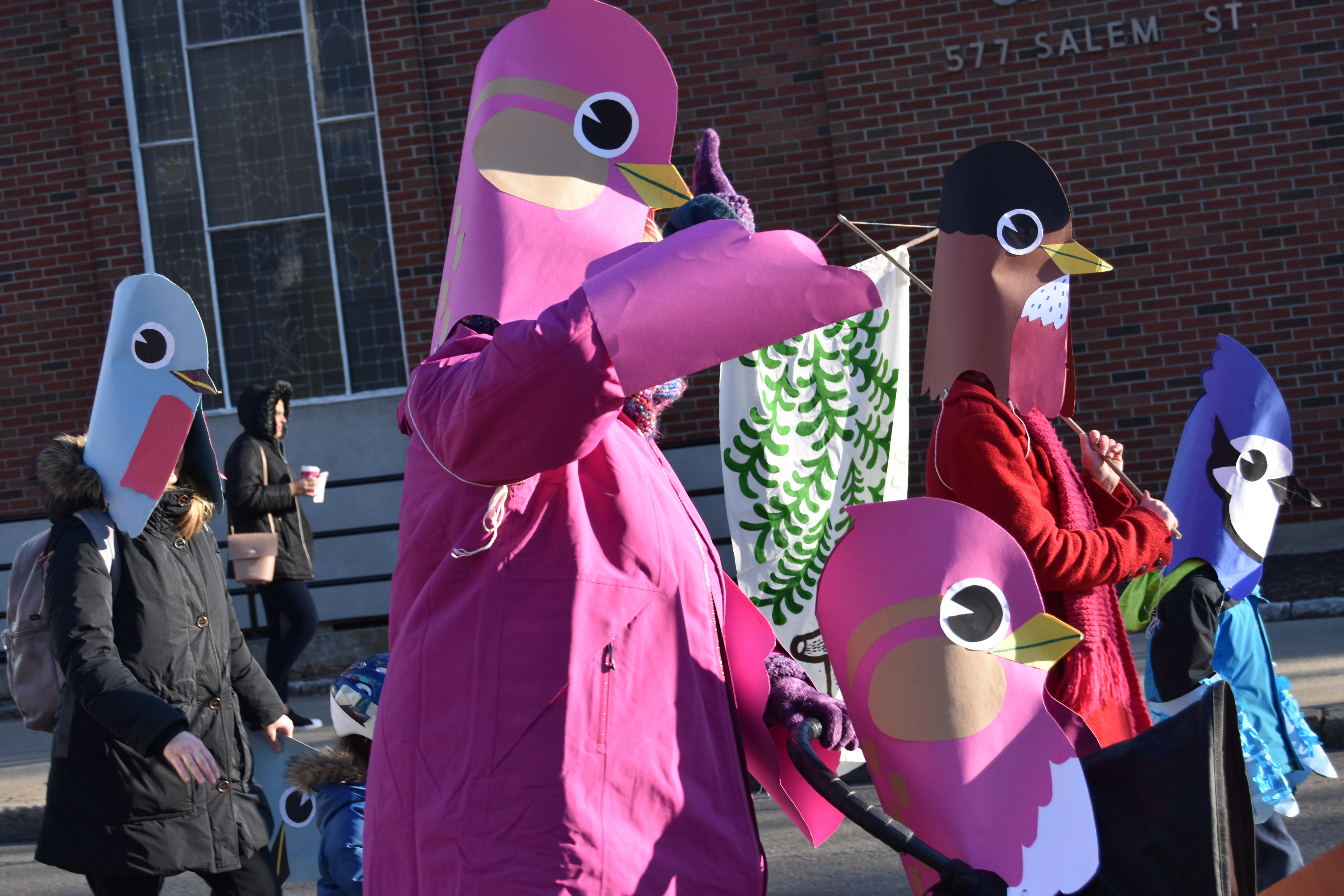 Here we are marching in Songbirds for Biodiversity in our urban parks in Malden’s 2019 Parade of Holiday Traditions.

Here we are marching in the Fox Festival Parade at the Feast of the East, Arlington, June 15. Students of the Hardy School, Arlington, painted patches depicting all the things dolphins need to live, so that we could add them to this fabric banner puppet. We painted pictures of squid, fish, crabs, octopi, clean water, sunshine, phytoplankton, zoo plankton, other dolphin friends and family, thoughtful human stewardship based on science research, no seismic blasting, no oil drilling, no toxics and no plastic.

We also sent postcards to our local legislators in support of Massachusetts Senator Cyr’s bill S448 to protect New England Coasts from oil drilling. Thanks to the Surfrider Foundation for guidance and information! Contact Surfrider to find out about actions you can take to protect our beautiful coasts. Cecily Miller of Arlington Public Art and  Hardy School PTO parents helped students make dolphin parade signs and wave crowns to bring our love of oceans to life! Thanks Cecily, the Hardy PTO, Surfrider, and all the families who rose up for dolphin power! 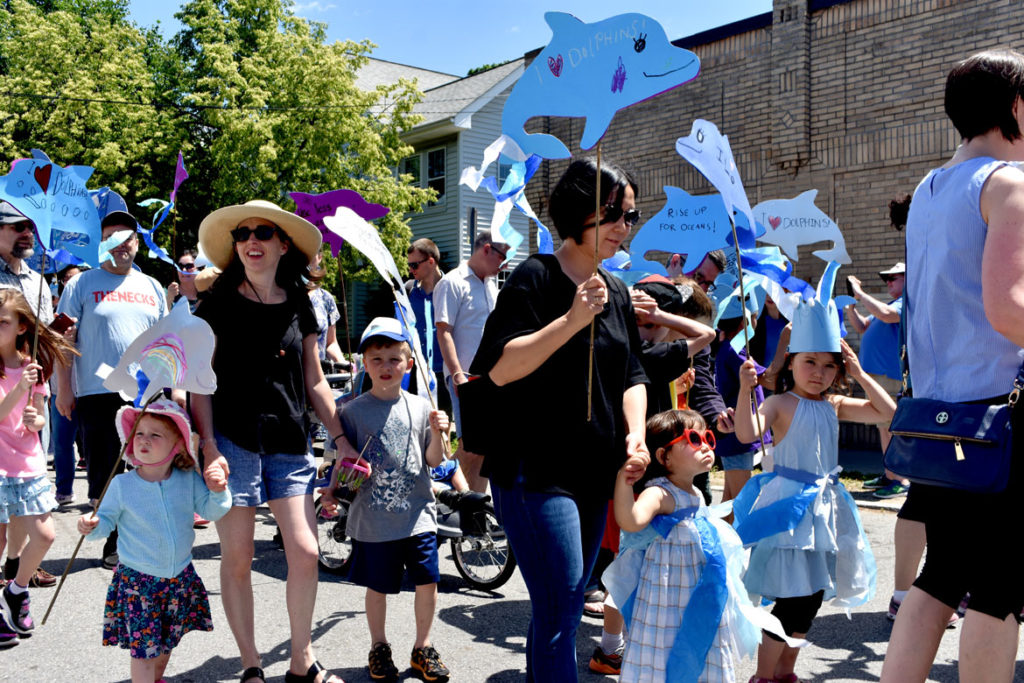 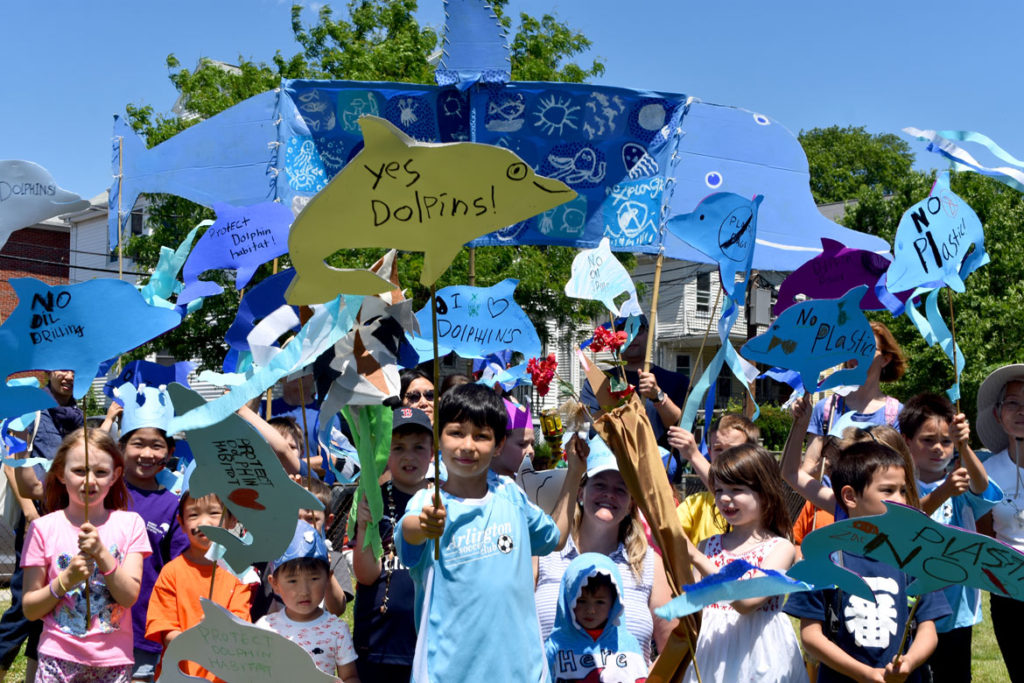 Feel free to contactWonderland Spectacle Company for all your empowering spectacle and activist campaign needs. We’ll help your organization make a splash at your next community event! Photos by Greg Cook of Wonderland.

Groundhog on Strike for Climate 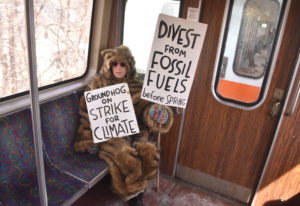 This was not a Happy Groundhog Day.

Fossil-fueled global warming outcomes have been worse than climate scientists predicted. Scrambled up seasons are having a cascading starvation-inducing effect on the time-sensitive relationships between flowering plans and trees, insects, and  birds.

To mark this important weather-climate themed holiday, I made a pilgrimage to the financial district and marched around the headquarters of big banks notorious for investing in the fossil fuel industry. During corporate lunch time, I sauntered through crowds of investors and bank managers on lunch break from investing in our collective fossil-fueled destruction to get a slice of pizza or a quinoa bowl from local cafes.

I plan to do more of these with themes for relevant holidays, because investors in fossil fuels should not be allowed to stand next to food trucks waiting for their lunch orders like everything is normal, because is not. Let me know if you want to join me. 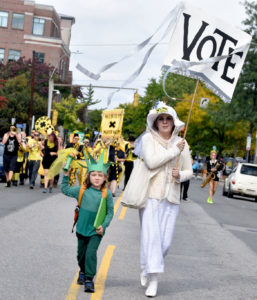 In the 2018 HONK! parade, a ghost of a Suffragette  urged everyone to vote this year, and a tiny Statue of Liberty marched along side to remind everyone what is at stake. Thanks for all the cheers and thumbs up! To see more parade photos, visit Wonderland. 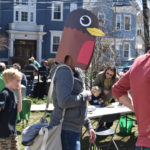 Thanks everyone who made song bird masks with me and the Wonderland Spectacle Company at April’s Starting Over Festival at the Quincy Street Open Space with the City of Somerville, Sustainaville and the Somerville Arts Council. It was so cool to see giant song birds wandering around among the tulips and open air poetry. Thanks for making this tiny Earth Day/Arbor Day Festival into at beautiful spring pageant! Photos by Greg Cook of Wonderland, 2018.

Thank you, Arlington Public Art, the Fox Branch of the Robbins Library, the Thompson School, and especially Cecily Miller, for inviting our Wonderland Spectacle Company to be part of the Fox Festival Parade. We had a lovely time bringing the forest to take over the streets!  Photos by Greg Cook, 2017. 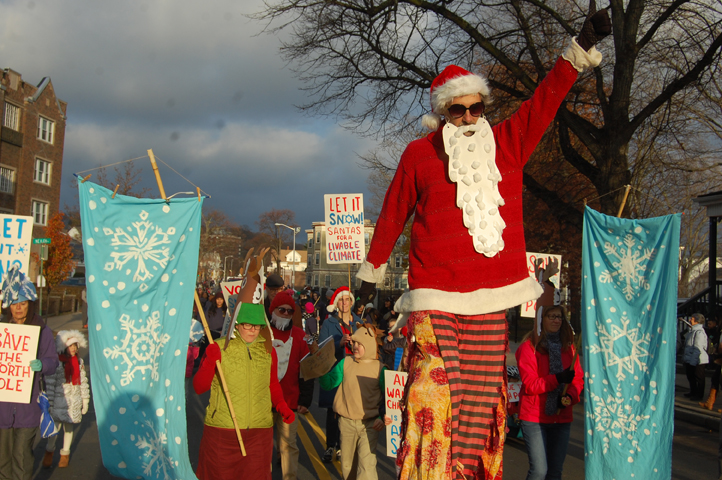 Thanks to everyone who marched with Let it Snow! Santas Against Global Warming in the 2016 Malden Parade of Holiday Traditions on Nov. 28. See more photos by Greg Cook here.

Gearing up for the HONK! parade, October 9, 2016, Davis Square, Somerville.

All ages enjoyed creating reindeer, walrus, polar bear masks and Santa beards at our Parade Arts and Crafts Workshop for “Let it Snow!: Santas Against Global Warming” at the Malden Public Library, to prepare for the Malden Parade of Holiday Traditions, 2015. We’ve got a giant animal herd and Santa beard army available for any upcoming climate mobilization marches.

Make the Switch! to Renewable Energy, with Mothers Out Front