I created and installed this site specific sculpture, called “We Are Here: Bioregional Locator” at Dunes Edge Campground, Provincetown, as part of 2014 Appearances Eco-Arts Festival in Provincetown, MA, hosted by the Provincetown Conservation Trust and the Trustees of Reservations. I learned so much from this project: first I researched the seasonal comings and goings of living things that call Provincetown their home. 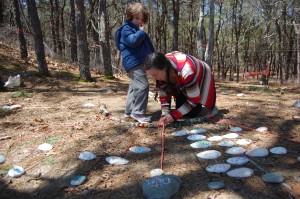 I poured over scientific papers about different species, what temperature the water must be for them to spawn or their eggs to hatch, what month they arrive from the arctic or the equator and why. I found the directions of the sunrise and set on the compass, and I created a calendar made of found local materials washed up on the tide, plus yarn and paint.  Provincetown, the sandy duned fist of the flexed arm of Cape Cod, curled out into the Atlantic and the Southern Gulf of Maine, surrounded on three sides by dynamic salt water habitats: George’s Bank, to the west, Stellwagen Bank, to the north, Cape Cod Bay, to the South and West.  When I drove with my family out to the very tip of the land, and we stood on the windy shore,  I felt I was entering a very dynamic place. We walked the beaches scanning the waves, in case we might see a whale. (It being April, whales are known to be spotted from the beach on their way north.) Reading all those scientific papers about the ecological communities ahead of time, it was as though I had read a thousand love letters from the Gulf of Maine and now I was visiting its very heart.

As part of the show, I was interviewed by Dorothy Palanza.

You can watch the video here. Below is the interview transcript:

This installation I’m working on is called “We are Here: Bioregional Locator.” If you stand in the middle of it, you can see all the directions, north, south east and west, and then the angles of the sun rise on the solstices and the equinoxes and every month in between is here. And then, I also showed in each month what happens at that time of year in this bioregion. For example, in April here, the Gulf of Maine Gyre speeds up. Then that mixes the oxygen rich cold water with the warm water from the Gulf Stream, and the phytoplankton bloom, and then the krill come and find the phytoplankton, and the whales come up from the Caribbean and feast on all the krill, on their way to the arctic. And that’s just that time of year. So the whole calendar shows everything happening. Some things. I can’t show everything, I’d love to, I want to keep going and going and going. So, people can add their own. I have extra shells here. So people can add their own seasonal indicators, of what’s important to them.

I would like to add much more to this sculpture, and it can be adjusted for a other locations. And, next I intend to use it to show how fossil-fueled global warming has been heating up the ocean, destabilizing ecosystems of the Gulf of Maine. Temperature sensitive breeding of crustaceans and fish mean that the seasons of their lives are not lining up the way they have for centuries, causing massive population crashes of lobster, shrimp, many species of fish. News of stress and population crashes from University studies, fish and game wildlife reports, stories pepper the local news in our coastal communities.  Mysterious sights, such as large flocks of sick and dying Eider ducks falling out of the sky are more and more common. All the little strings that hold the web of life together are being pulled apart or broken. How much will we loose to climate change before we decide as a civilization to give up fossil fuels?