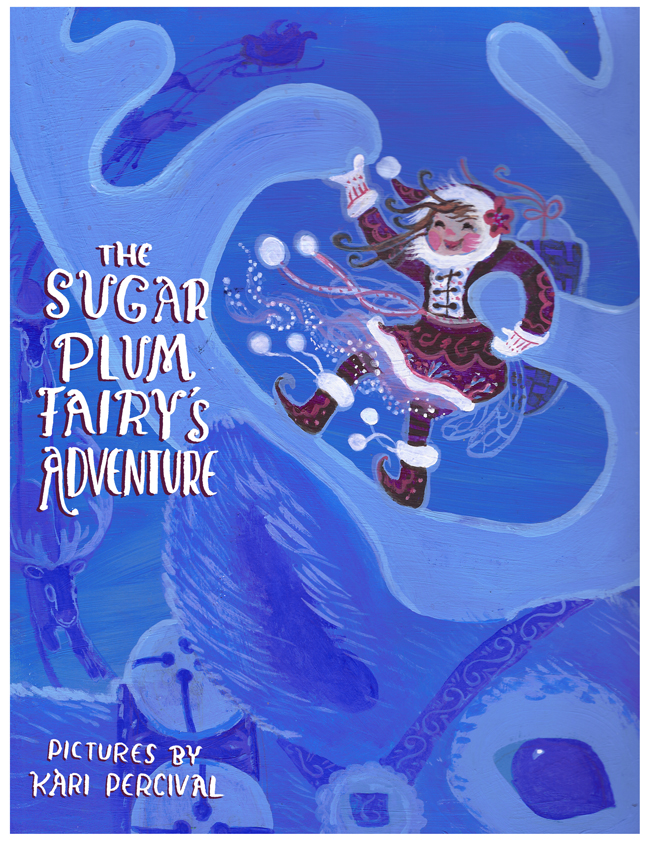 Here is my entry for the Make Art That Sells Picture Book Competition. The assignment was to create a children’s book cover for the title “The Sugar Plum Fairy’s Adventure.” I have super fun imagining who the Sugar Plum Fairy is and where she is from and what kind of adventure she is going on. I tried to keep some of Zoe Tucker and Lilla Roger’s tips in mind:

1. Give the focal point the highest contrast. Who knew that tone conveys a hierarchy of attention? Since I wanted the focal point to be this tiny fairy, and I didn’t want to confuse people with reindeer and bells and harnesses and other stuff, I made the tiny fairy where white, dark brown, magenta and pink, so she pops, and I limited the palette of the reindeer and sky to all twilit blues. Oh, yeah. Don’t forget the limited palette. It is like all SOPHISTICATED.

2. Make the character big on the cover. How can I show a fairy big and little at the same time? This was tricky. I wanted to the fairy riding on the reindeer antlers, but then if I showed the whole reindeer, or even the reindeer’s whole head, the fairy became too small to show the expression and details  So I blew up the reindeer a big as I could, and only the eye, ear, and antlers shows. Do you think that works?

3. Tell the character’s story through relationships, clothes and accessories. Where is the Sugar Plum Fairy from? Santa’s bakery/candy kitchen in the North Pole? Where is she going? Hitching a ride on Santa’s sleigh to make a special delivery in person?  She is bundled up against the arctic cold and biting wind in some elaborately decorated travel clothes with white fur trim, worn over her gossamer fairy clothes and wings. She has packed woven birch bark basket on he back with gifts.

4. Show expression in the character’s face and pose. Even  though her cheeks and nose are pink with cold, her eyes sparkle and face is lit with joy. She is smiling at the sky, exhilarated by her unusual journey and happy at the thought of her destination and her self-chosen mission. Her pose is active: she’s holding on tight to a reindeer’s antler, bracing her hands and feet to stay on.

I know I still have a ways to go, but its fun to try to put some of these ideas into action.