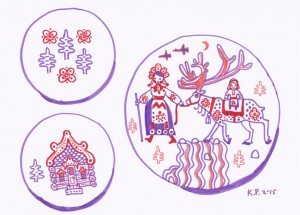 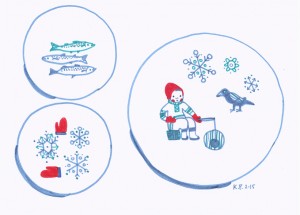 We are having another snow storm here! Instead of shoveling, I drew these scenic plate designs for MATS Bootcamp with Lilla Rogers inspired by a mash-up of Russian, Inuit, Scandinavian folk and mid-century modern imagery.  I am having fun playing with folk scenes in the round and the limited palette. Some inspirations are from, Folk Art of the Soviet Union by Tatyana Razina, Inuit Women Artists by Odette Leroux, Arabia Finland Kalevala plates, and lots of other amazing stuff that blows my mind.