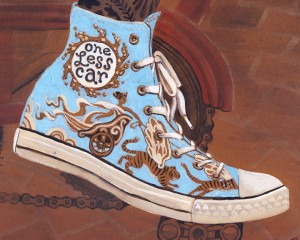 How does it feel when you ride a bike? Doesn’t everyone feel like a goddess on a chariot being pulled by winged tigers?

I just submitted this art work for the first assignment of Lilla Roger’s Global Talent Search. Only 50 are chosen to continue out of I don’t know how many artists. Who will win? Who will go on to the next round? I loved Lilla Rogers Bootcamp last spring, because the on-line community was so inspiring and encouraging. But because GTS is a contest, no one has been sharing their ideas, sketches or completed work on the group facebook feed, and so I have been a bit lacking in encouragement, and I have been missing inspiration. But I did manage to squeak this in under the deadline!

The opening challenge was to design a pattern for a shoe for bicycling for a particular fictional fashionable Brooklyn shop owner. The assignment asked for some typography in the design, which felt a bit tricky, since the space on a shoe is not big for a pattern let alone words. But I thought, if she biked to work, she might like shoes that had an inspirational environmental slogan, and “one less car” was the only think I could think of to put on a bike shoe that wasn’t totally random.

After being tempted to create a bright folk-art floral on black, (which does seem to be everywhere this season) I picked out another idea that I haven’t seen around much: I loved the colors of her shop: pale sky blue with tarnished gold, and I was inspired by all the baroque swirls she is partial to, to think of a sort of fantasy transportation. First I drew a few unicorns, then bicycles, then I stumbled on some ladies hat box designs from the 1820s, and there was a goddess on a chariot pulled by hipogryphs, and another with a god pulled by lions. So I made my own design with winged tigers. I researched some Greek chariot scenes. Billowing fabric seems to be compulsory. I also spent a lot of time researching bike pedals and Converse Shoes, so I could give my design a bit of context. It was super fun to paint the shoe! (Did I mention that the city I live in, Malden, is the birthplace of Converse shoes? Our library is called the Converse Library!)

I like how it came out: sort of like a scene on an old calliope at the fair. I think its sort of quirky and witty with the words, but pretty at the same time. I am looking forward to seeing the gallery when it comes out. I am so curious to see what other people did with this assignment!