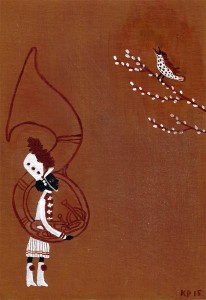 When I learned to play the clarinet, the news that my middle school band was going to march in our small town Memorial Day parade filled me with delirious excitement. I pictured tall hats with plumes, smart jackets with lots of braid and buttons, pleated skirts, and high pom-pommed boots. So when I learned that our finery was going to be limited to matching printed t-shirts, jeans and sneakers, I became a bit deflated. At the time, that stoic frugal New Englander Voice in my head sternly pointed out that I was being shallow, that it was all about the music, and not about what we were wearing.

So it was with delicious glee that I painted this musician tricked out in a lovely marching band uniform. This illustration is my submission for the DRAW THIS! prompt “muse,” and it was included in the September issue of the Society for Children’s Book Writers and Illustrators (SCBWI) online magazine,  Insight. 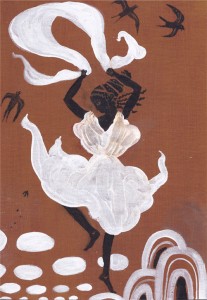 How did I get here? I started off inspired by the source of the word muse from Greek mythology. I looked at the art of grecian vases, with a limited “red”, black and white color palette. I love how figures are depicted in just black or white or red. It is beautiful.  I love the value system. I played around with painting in this style and painted this: one of the Greek muses. But I felt like I wanted to adapt this style to a modern subject and create my own original picture. I played around with an image of a small girl being transfixed and inspired by a street accordionist. 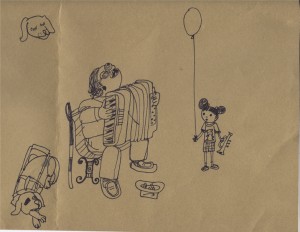 I love this drawing, but test audiences said it was unclear who was the muse and who wasn’t. (Though I think it would still make a fabulous painting.)

So I came up with this image of a small girl in a smart marching band uniform, with a very big instrument, waiting for the parade to start, and getting inspired by the fresh discovery of her new muse: a tiny song bird belting out its own big concert, (and, by the way, arrayed in its own breath-takingly beautiful speckled song-thrush uniform). 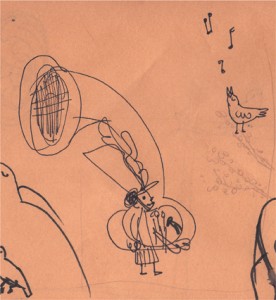