To save Vasalisa’s life, her magic dolly does tons of chores before Baba Yaga comes home at nightfall. Back at home, her step-mother runs the house on her back, too. The list of tasks is endless. But the space on the page is not. So which ones should I show next?  Here is the relevant text:

(At home) ... the flower beds were weeded, the cabbage sprayed, the water brought in, the stove fired.

(At Baba Yaga’s) “Tomorrow after I go, see to it that you sweep the yard, clean the hut, cook the dinner, wash the linen, and go to the corn bin and sort out a bushel of wheat,…. and in addition, take the poppy seed from the bin and get rid of the dust. Someone threw dust into the bins out of spite.”

(In the morning) Vasalisa…stopped wondering which work she should do first,  for low and behold, all the work was done; the doll was picking the last shreds of chaff from the wheat. “Ah my savior,” said Vasalisa to her doll, “you have delivered me from death.” “All you have to do, answered the doll, creeping into Vasalisa’s pocket, “is to cook the dinner…”

Wash the linens: Who knew that things like clothes pins, clothes lines, wringers, washboards and tubs were high-tech, modern inventions? It turns out that in most of the pre-industrial world, doing laundry means going to the river and hitting your wet clothes with a wooden bat against a rock, and hanging them on some nearby bushes to dry. So I’ve sketched both, trying to highlight physical drama and humor. The impossibly heavy outsized scale bat, the leaning against the wind on a river birch twig and fighting with the linen like a sail. Which laundry scene should I show? One or both?

Make the dinner Dolly tells Vasalisa all she needs to do is make the dinner, but does the doll fetch a cabbage from the garden or bake the bread or setting water to boil in a pot ahead of time? I also have a sketch of her carrying a giant stack of fire wood. 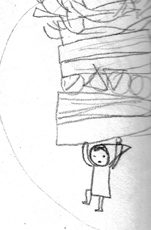 Style  Out of the three dolly spots  I’ve done so far, the water pail has more of the flattened folk art quality that I am aiming for, and I want my compositions to lean more in that direction, so I am looking for ways to do that, if you have any ideas for revision before I do the finals. I tend to too much baroque lines, (as in washing dishes.) Thanks for looking!

Quotes from RUSSIAN FAIRY TALES, translated by Norbert Guterman from the collections of Aleksandr Afanas’ev, of the Pantheon Fairy Tale and Folklore Library, 1945 Pantheon Books.