“There is nothing in the world that is so transitory and fragile as a snowflake, and there is nothing so irresistible as an avalanche, which is simply millions of snowflakes. So that if each one of us, little snowflakes, just does our part, we will be an irresistible force.” – Florence Luscomb, who made 220 speeches for woman’s suffrage in 1915.
I created this stripe to represent Massachusetts in the Her Flag 2020 project along with artists of 35 other states, at the invitation of lead artist Marilyn Artus, to celebrate the 100 year anniversary of the passage of the 19th amendment. I hope you can join us in Boston for this free public  celebration on the day Massachusetts ratified the amendment, July 25, from 4:30-6:30 PM, at the Old State House, 206 Washington St, Boston, MA.
The movement for women’s rights in 19th century Massachusetts was inseparable from the movement to end slavery, racist and sexist oppression. In Massachusetts, in the early 19th century, women of color and white women, moved by the heinousness of slavery to speak in public, encountered violence and hateful denunciation as they joined public political life because of their gender. They realized they had even more work to do. In the 1850s – 1870s, they convened, debated and signed petitions. “Equality before the law, without regard for sex or color,” became their cause. They edited newspapers, wrote books and gained partial suffrage. From 1880s through 1900, they built coalitions with unions and clubs. Through the 1900s-1920, they lobbied and rallied and coaxed the popular idea of women’s suffrage from radical to fashionable to obvious. 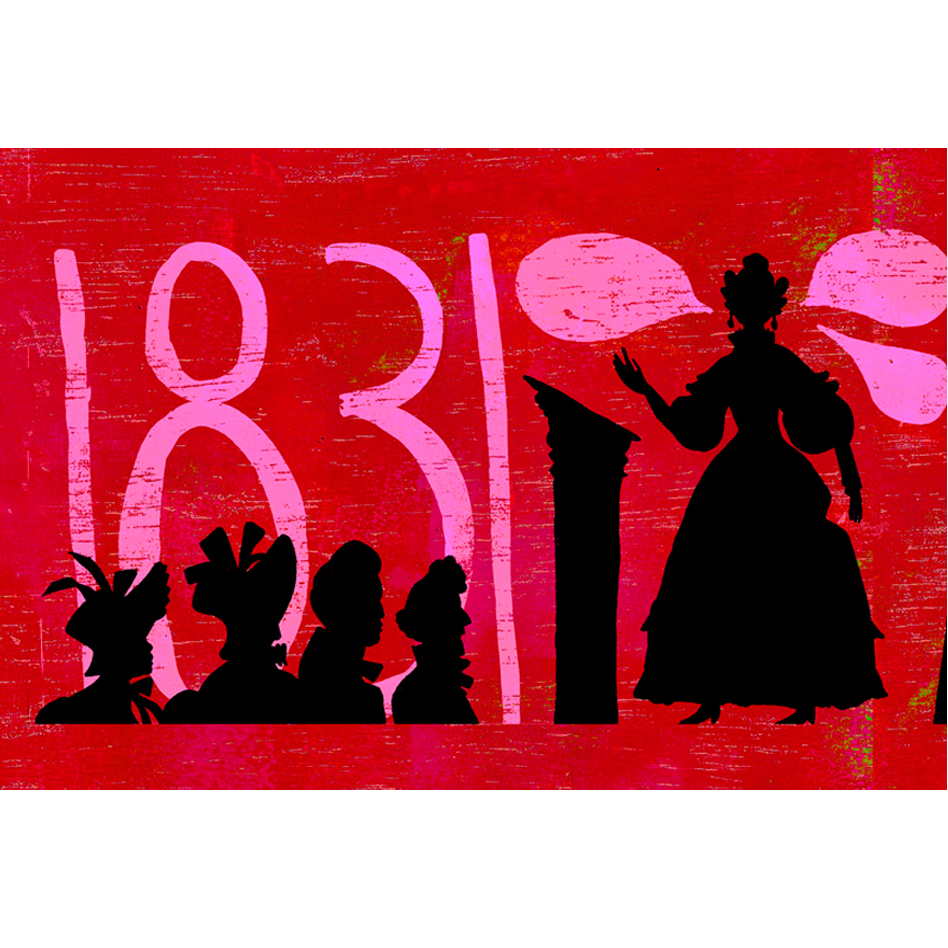 “I am sensible of exposing myself to calumny and reproach; but shall I, for fear of feeble man who shall die, hold my peace? Shall I, for fear of scoffs and frowns, refrain my tongue? Ah, no!“–Maria (Miller) W. Stewart, speech delivered in Boston, 1831.
The intersectional movements for equality and civil rights was lit by this black feminist, one of the first to lecture in mixed public, Maria (Miller) Stewart. At the time, women were forbidden from speaking in public. Maria bravely broke this taboo. 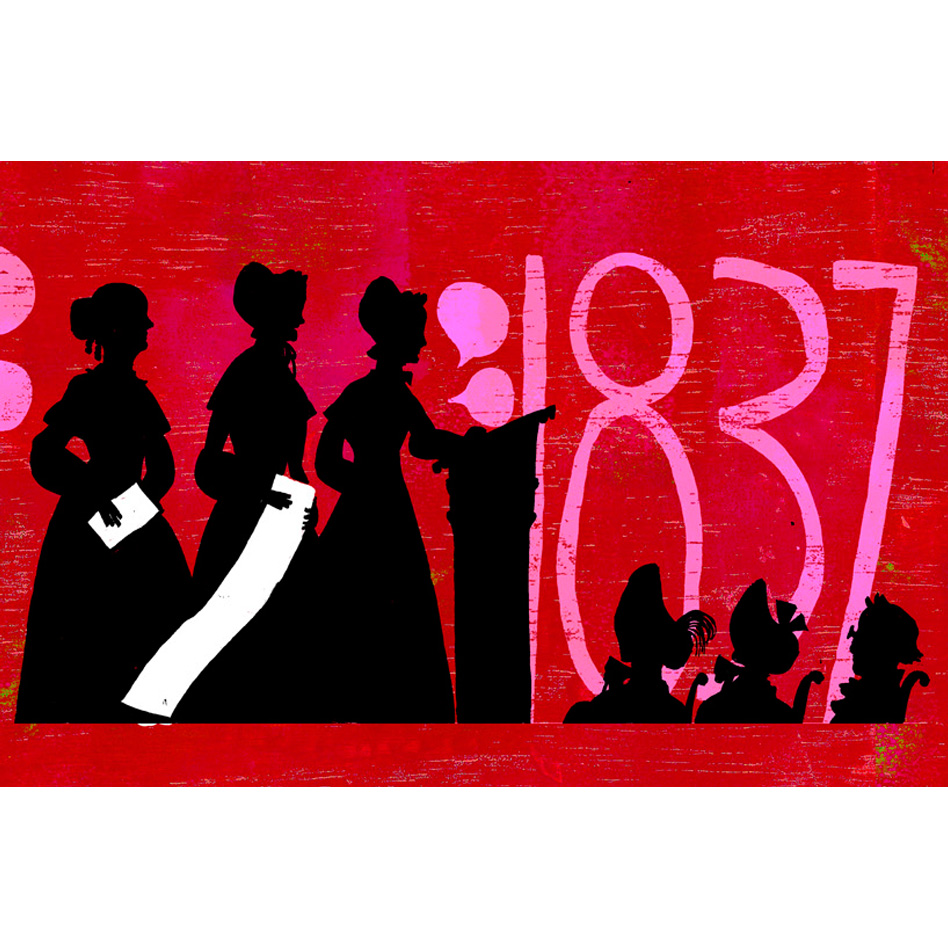 “I ask no favors for my sex. I surrender not our claim to equality. All I ask of our brethren is, that they will take their feet from off our necks, and permit us to stand upright on that ground which God designed us to occupy.” – Sarah Grimké , Letters on the Equality of the Sexes and the Condition of Woman, July 17, 1837. Sarah and Angelina Grimke became targets of violence and hatred, not just for bravely speaking out against the institution of slavery during their lecture tours, but especially for the audacity of being female and speaking in public. Pictured left is Maria Weston Chapman, another activist in both anti-slavery and women’s rights movements. As elders in 1870, the Grimkes’ declared that the 14th Amendment protected their rights as citizens to vote, and cast ballots in a local election as their “final act.” 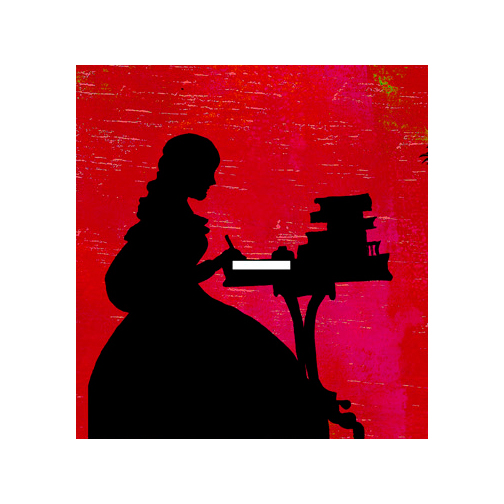 “It should be remarked that, as the principle of liberty is better understood, and more nobly interpreted, a broader protest is made on behalf of Woman. As men become aware that few men have had a fair chance, they are inclined to say that no women have had a fair chance”…– Margaret Fuller, 1845. Fuller’s consciousness-raising, radical, best-selling book, Woman in the Nineteenth Century, voiced her utopian vision urging equality for women.
Her writing influenced Elizabeth Caddy Stanton and countless others active in the Woman’s Suffrage Movement. “But if you ask me what offices [women] might fill; I reply—any. I do not care what case you put; let them be sea-captains, if you will…. We would have every arbitrary barrier thrown down. We would have every path laid open to Woman as freely as to Man.”

“Resolved, That political rights acknowledge no sex, and therefore the word “male” should be stricken from every State Constitution.” – From Resolutions of the first National Woman’s Rights Convention Worcester, Massachusetts, October 23-24, 1850
Pictured here are a few key speakers at the very first National Woman’s Rights Convention, Worcester, MA, 1850: Lucretia Mott, Frederick Douglass, Dr. Harriet Hunt, Abby Kelley Foster and Sojourner Truth. The idea for a woman’ rights convention was floated that year at a Boston anti-slavery convention, after it had been noted that women who spoke out against slavery experienced violence and denunciation, not for their anti-slavery views, but for the audacity of joining public political discourse.
“Resolved, That women are clearly entitled to the right of suffrage, and to be considered eligible to office; the omission to demand which, on her part, is a palpable recreancy to duty; and the denial of which is a gross usurpation, on the part of man, no longer to be endured; and that every party which claims to represent the humanity, civilization, and progress of the age, is bound to inscribe on its banners, Equality before the law, without distinction of sex or color.” –From Resolutions of the first National Woman’s Rights Convention Worcester, Massachusetts, October 23-24, 1850.
Members of the committee who wrote the resolutions included (pictured) Lucy Stone, Ernestine L. Rose, Abby Price, and William. Lloyd Garrison, also E. W. Capron, W. H. Channing, Frederick Douglass, Wm. Fish, Harriet K. Hunt, M.A.W. Johnson, Samuel May, Jr., Lucretia Mott, Anna Q. T. Parsons, and Susan Sisson.
Abby Price asked the over 1000 assembled for the convention, “Is there a woman here, who is willing to be disfranchised, to be taxed without representation, to feel that she has no part or lot in the Government under which she lives – that she is a mere thing!”? 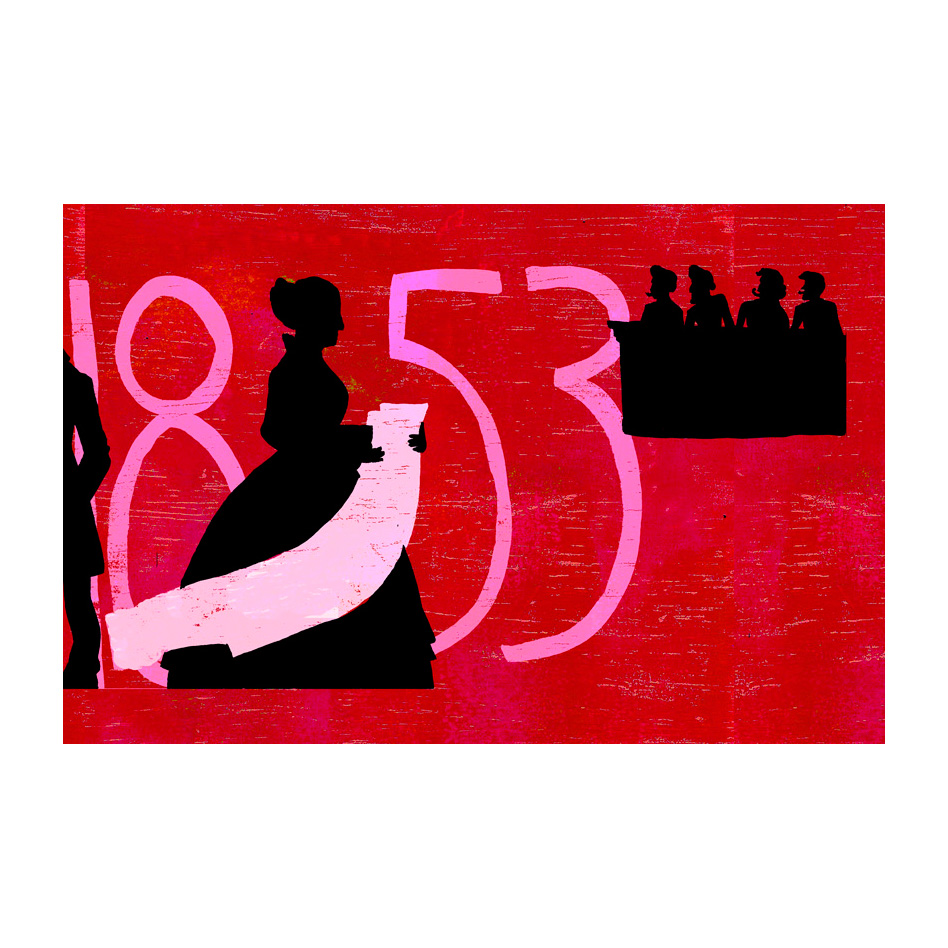 “We deem the extension to woman of all civil rights a measure of vital importance to the welfare and progress of the state. On every principle of natural justice, as well as by the nature of our institutions, she is as fully entitled as man to vote and to be eligible to office…ours is a government professedly resting on the consent of the governed. Woman is surely as competent to give that consent as man.” -Abigail May Alcott, who authored a petition to the 1853 Massachusetts Constitutional Convention for amendments to include a woman’s right to vote and political equality. Her petition was “set aside with as little regard as the stump of a well-worn cigar,” wrote Alcott. 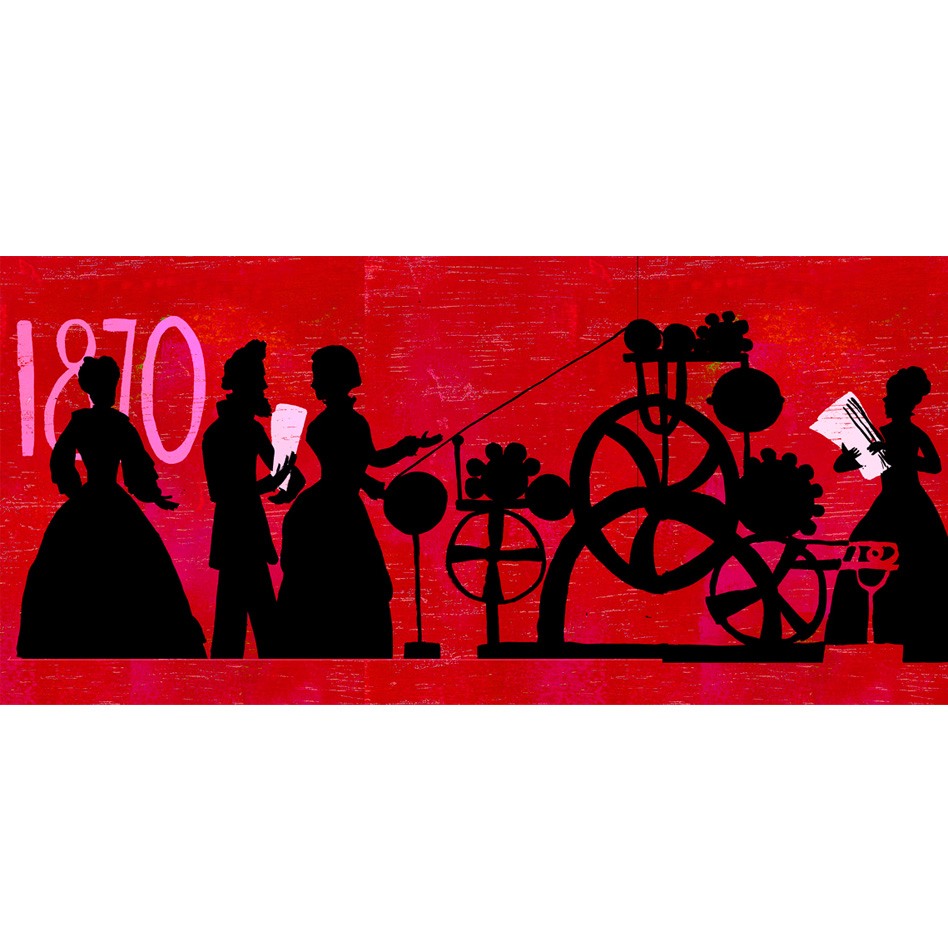 “I shall stick to my resolution of writing always what I think no matter whom it offends.” – Julia Ward Howe, editor, The Woman’s Journal, 1872-79.

In 1870, Lucy Stone and her spouse Henry Brown Blackwell teamed up with editor Mary Livermore to found The Woman’s Journal and Suffrage News in Boston, MA. Contributing writers included Louisa May Alcott, Elizabeth Stewart Phelps, William Lloyd Garrison, Julia Ward Howe, Thomas Wentworth Higginson, and many others. This newspaper – “devoted to the interests of women, to their educational, industrial, legal and political Equality, and especially to their right of Suffrage,” kept activist’s spirits up with encouraging news and spread talking points for woman’s rights across the nation until 1931.

“Above the titles of wife and mother, which, although dear, are transitory and accidental, there is the title human being, which precedes and out-ranks every other.”
– Mary Livermore, one of the founding editors of the Woman’s Journal 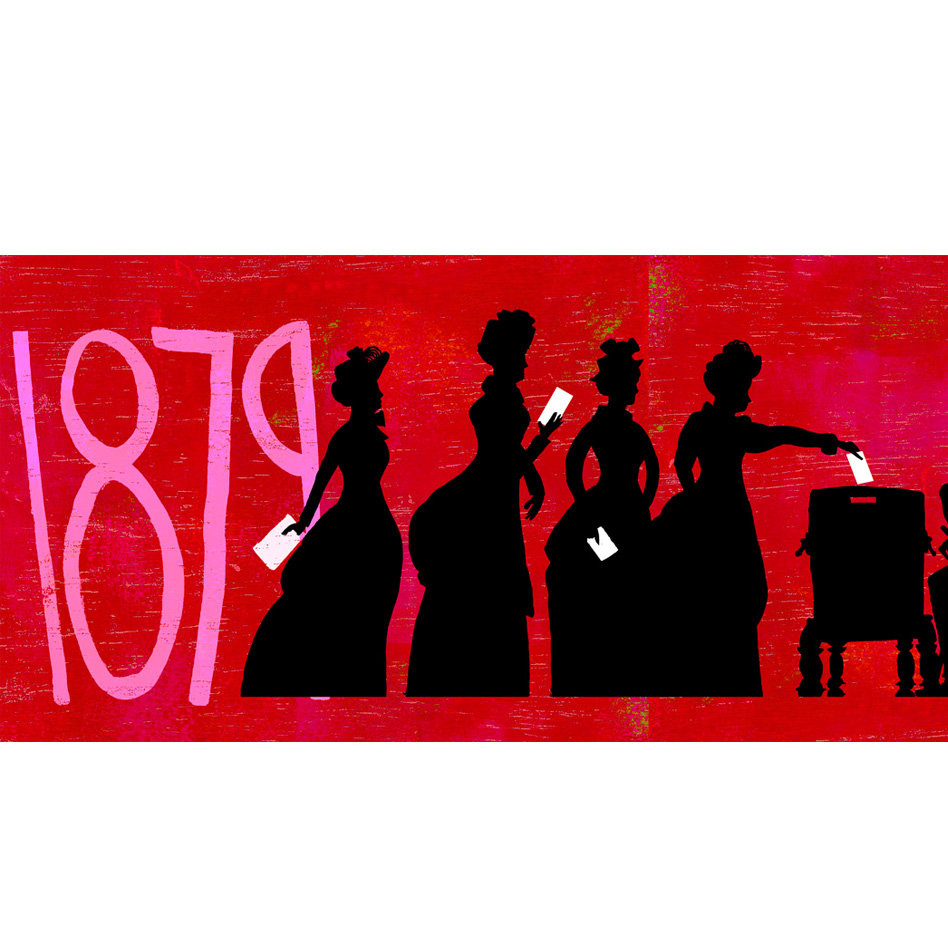 The word “male” had been added in to the Massachusetts constitution around who could vote, but NOT who could hold public office, so, in 1873, when Abigail Williams May ran for school committee, and won, along with several other female education activists, Massachusetts legislators conceded that maybe a concern for the education of children might indeed fall inside the sphere of women. In 1879, Massachusetts women won “partial suffrage” and the right to register to vote in school committee elections. Lucy Stone was behind this successful effort.
Writer Louisa May Alcott rounded up her friends to vote for the first time allowed in the next election in Concord in 1880, she reported, “No bolt fell on our audacious heads, no earthquake shook the town, but a pleasing surprise created a general outbreak of laughter and applause.”
Maria Louise Baldwin, first African American principal of the Aggasia School in Cambridge, voted with other women in elections for school committee and school board. Before the 19th amendement was finally passed in 1920, she had voted 41 times, and seen that even “so megre a share of voting power,” gave schoolteachers a voice to protect their jobs and their schools. She added that, “In several cases, local schools have been kept, by the Women’s Vote, from the control of persons who threatened all that was in them.” 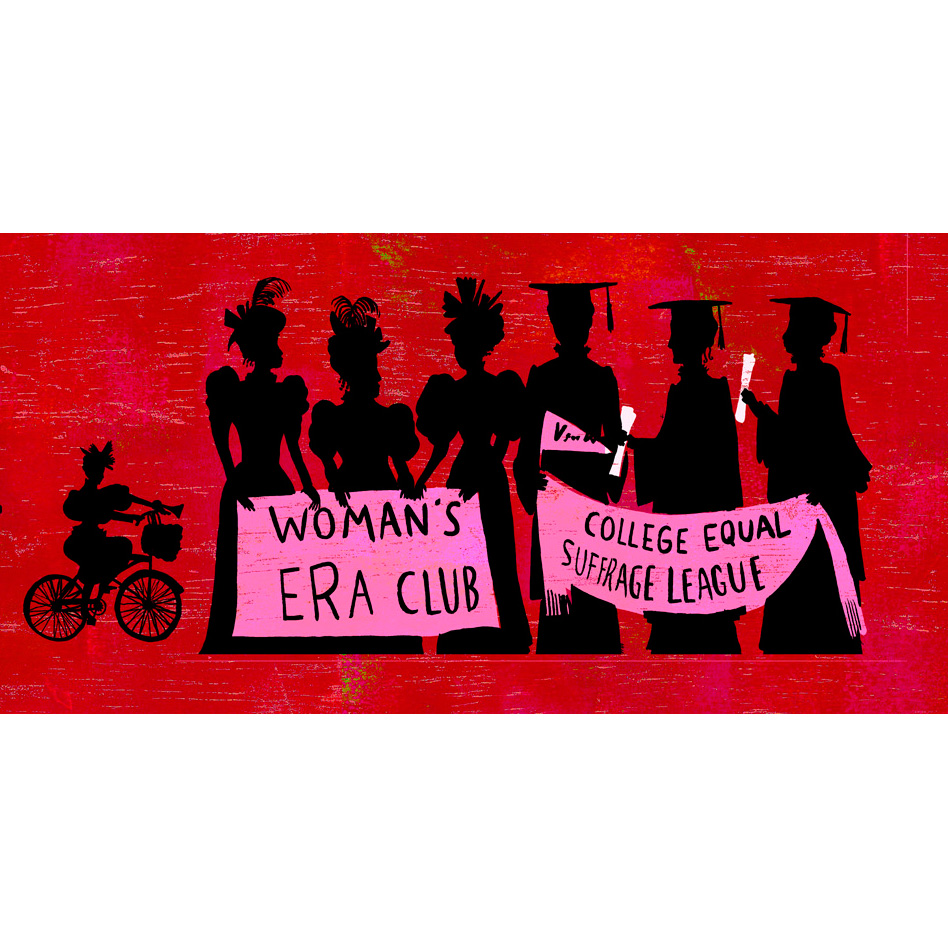 “In the first place, we need to feel the cheer and inspiration of meeting each other, we need to gain the courage and fresh life that comes from the mingling of congenial souls, of those working or the same ends.”…”…and, too, we are not drawing the color line; we are women, American women, as intensely interested in all that pertains to us as such as all other American women: we are not alienating or withdrawing, we are only coming to the front, willing to join any others in the same work and cordially inviting and welcoming any others to join us.” – Josephine St. Pierre Ruffin,1895, organizer of the first National Conference of Colored Women at the Charles Street A. M. E. Church in Boston, founder of the Women’s Era Club, and newspaper.
In the late 19th century, while the ideas for woman suffrage had been hammered out, they lacked broad support, and a state referendum on woman suffrage failed. So activists broadened their strategies: they built coalitions to spread their empowering vision for woman’s suffrage among labor unions, colleges, and woman’s clubs.
“Perhaps it was that referendum (on woman suffrage in Massachusetts) which led Mr. Gates to demand of his students in English 22 at Harvard and Radcliffe a “daily theme” on the proposed enfranchisement of women. The following day he reported that in our class of about seventy only two were in favor. And he read aloud my theme as one in opposition. In the hundreds of speeches that I was to make later on, I doubt that I ever expressed my convictions more clearly than in the brief statement: “I see no more reason for the men of my family to decide my political opinions and express them for me at the polls than to choose my hats and wear them, or my religious faith and occupy my seat in church.” – Maud Wood Park, who founded the College Equal Suffrage League with Inez Haynes Irwin in 1900 to rally support from college communities. 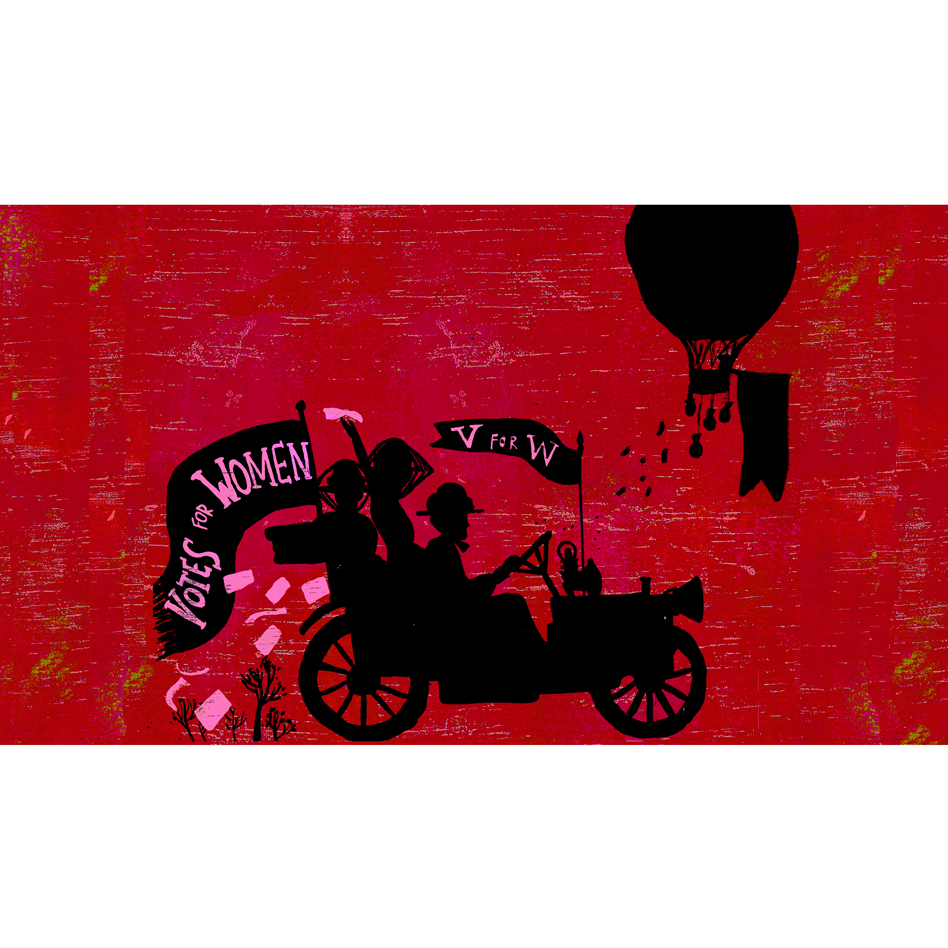 “There is nothing in the world that is so transitory and fragile as a snowflake, and there is nothing so irresistible as an avalanche, which is simply millions of snowflakes. So that if each one of us, little snowflakes, just does our part, we will be an irresistible force.” – Florence Luscomb, 1887-1985
Florence Luscomb’s mother took her to hear Susan B. Anthony’s speak when she was five. She became a civil rights activist and architect among the first class of women to graduate from MIT. Along with many others, she worked to achieve womens’ suffrage. Through the 1900s to1920, they lobbied and rallied and coaxed the idea of women’s suffrage from radical to fashionable to obvious. In 1915 she made 220 speeches during a campaign to amend the state constitution to let women vote.

“You never give up hope, never, because just when you think you’re going to give up, that’s when you could really gain the victory — if you just kept on going, just a little bit more.” – Melnea Cass, who organized African-American women to cast their first votes in 1920.